This Vegan Bacon & Apple Pizza is a perfect balance of sweet, salty, crisp, and cheesy! The pizza dough is soft and fluffy yet perfectly crisp on the bottom and the crust. The toppings are sweet, savory, and absolutely delicious. It's a must try!

This Vegan Bacon & Apple Pizza has changed pizza for me! The dough came out so fluffy and delicious, I had to share it! If you've never made your own pizza dough, why?? It's so easy and way better than store-bought. It's a mix of very simple ingredients that you probably already have in your pantry and has only 1hr of inactive time. So simple! So, my deep love for this dough sparked this pizza idea! Garlic butter, a trio of vegan cheeses, vegan bacon, apples, walnuts?!?! Yes! My boyfriend has had a non-vegan version of this pizza at a few pizza shops and always raves about it! He took a bite of this one and said "It tastes just like it!!!" This recipe is a win and I'm so excited for you all to try it.

What You Will Need For This Vegan Bacon & Apple Pizza

Stand Mixer comes in handy when making dough from scratch but you can do this by hand as well. A 12in Cast Iron Skillet or a 14in pan if a thinner pizza is desired.

Vegan Cheese: I used Gouda from Follow your Heart, Mozzarella Cheese and Aged Cheddar from Violife. Follow your Heart and Violife are my personal favorites but choose any three different flavors of vegan cheese that you love.

Vegan Bacon: I used the bacon from Sweet Earth which is seitan based and very delicious. Any vegan bacon will work.

Pizza Dough: I made my own pizza crust below but you can use a pre-made crust or your favorite dough recipe.

How To Make The Best Vegan Bacon & Apple Pizza

I love using bread flour for this pizza crust. It's fluffy and crisp on the bottom. But if you're short on time, use a pre-made pizza dough or make the dough the day before. Simply let the dough rise for 1hr, wrap in cling wrap, and place in the fridge overnight. 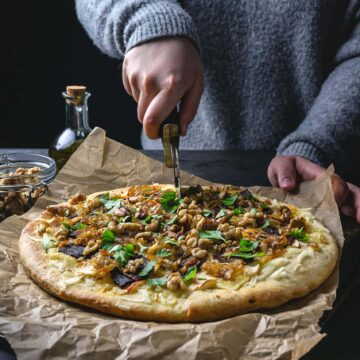