Bagel Bombs have been popular for a while and I've been incredibly curious about them! I live in NYC. We're known for our bagels and yep, they are as delicious as you'd imagine BUT I can't find a dang vegan bagel bomb. A bagel bomb is a normal bagel dough but it is shaped in a ball FILLED with cream cheese. I just assumed it couldn't be done. Maybe a vegan cream cheese just won't hold up! Well, I was wrong and I am thankful because these Vegan Bagel Bombs are well, bomb. I cringed writing that. But I'm just going to go with it.

These are freezer friendly which makes breakfast easy! Just thaw overnight then warm them up for a few minutes in the oven and done. These might seem hard to make but it's really easy! All right, let's get busy!

What You Will Need For These Vegan Bagel Bombs

A stand mixer with a dough hook is a helpful tool when making bread. But please note that this can be done by hand. To do so, simply knead the dough by hand.

I don’t recommend making any substitutions to the dough itself. This recipe was tested multiple times and this was the best outcome. But the topping is up to you! I used a pre-made everything bagel seasoning and then some with onion but you can make these poppyseed, sesame, garlic, etc! Same goes for the cream cheese. Keep it plain or add more stuff to it!

How To Make The Best Vegan Bagel Bombs Every Time

I always use and recommend instant yeast because you can add it straight to the dry ingredients and skip the extra step of activating it. If you want to use active dry yeast, go ahead but don’t forget to activate it. The most important part of yeast is the liquid temperature. Make sure the water is between 120F-130F or you yeast will either die or never activate. I highly recommend using a thermometer when making bread. 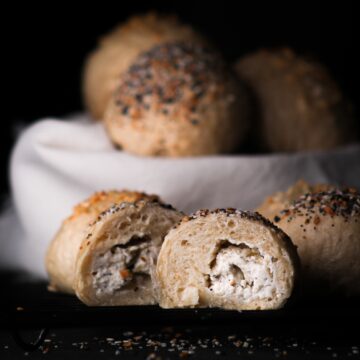 A bagel bomb is a normal bagel dough but it is shaped in a ball FILLED with cream cheese. I just assumed it couldn’t be done. Maybe a vegan cream cheese just won’t hold up! Well, I was wrong and I am thankful because these Vegan Bagel Bombs are well, bomb. I cringed writing that. But I’m just going to go with it.
5 from 1 vote
Print Pin Rate
Prep Time: 30 minutes
Cook Time: 30 minutes
Resting Time: 1 hour
Total Time: 2 hours
Servings: 16
Author: Liv King

Leftovers can be frozen. Thaw overnight and heat up in the oven.
Did you make this recipe?Please leave a comment on the blog or share a photo on Instagram!