Fresh yet filling, these delicious crispy battered vegan fish tacos are a fun summer dinner. Load it up with fresh ingredients like my red cabbage slaw, some avocado and cilantro and you'll have yourself a super satisfying and delicious meal.

Why You'll Love This Recipe

These vegan tacos are made with crispy fried vegan fish made from artichoke hearts and hearts of palm with some nori and old bay for added fishy flavor. These tacos are perfect for a fun summer dinner or a meatless Monday meal! Top it off with some tartar sauce and red cabbage slaw for the ultimate experience.

To make these vegan fish tacos, you’ll need to start by making my fish stick recipe, easy vegan tartar sauce and red cabbage slaw. Once you’ve made those, follow the steps below.

How to Make Vegan Fish

I’ve seen vegan fish made from tofu, banana blossoms and even celeriac. Those all sound delicious but I chose to go with a mixture of canned Hearts of Palm and Artichoke Hearts for my homemade vegan fish sticks. Both of these combined give the vegan fish a flaky texture that we are after!

The ingredients are placed in a food processor and pulsed until combined but still flaky and textured. Then, shaped in to 8 fish sticks and battered in a sparkling water batter which creates a super light and crispy exterior. The battered vegan fish is shallow fried until golden crispy.

Full written instructions and ingredients can be found on my blog post for Vegan Fish & Chips.

How to Make Vegan Fish Tacos

To make these vegan fish tacos you'll need to start by making my Vegan Fish Sticks, Vegan Tartar Sauce and Red Cabbage Slaw. Once you've made those, follow the steps below.

Heat up the flour tortillas on an open flame on a gas stove until brown spots appear and the tortilla gets puffy or heat the tortillas on a pan if you have a gas stove for a few seconds each side. Then, add the vegan fish to the tortilla and top with vegan tartar sauce and red cabbage slaw. I love to top it off with cilantro and a squeeze of lime.

This recipe can make anywhere between 8-12 tacos. The vegan fish stick recipe makes 8 pieces of fish but you may not need a whole one per taco. I cut mine in half and layered them and found it perfect but you may want less or more depending on the size of your tortilla.

Speed it up: Make things in advance. The tartar sauce and red cabbage slaw can be made and stored in the fridge for up to a 5 days. The fish is best served day of but can be reheated.

Storage: I recommend storing everything separately and building the tacos when ready to serve.

Reheating: Reheat the vegan fish in a 350ºF oven for 15 minutes or until hot and crispy.

Additions: Avocado Slices would be delicious. Instead of Tartar Sauce, Spicy Mayo Drizzle would be good or try it with The Best Corn Salsa or Spicy Pineapple Mango Salsa. Add jalapeños for some spice!

Substitutions: You can switch this up however you'd like! All you really need is tortillas, vegan fish and any toppings that you love and a delicious sauce.

I don't have time to make vegan fish from scratch! What else can I use?

Gardein makes an incredibly delicious store-bought vegan fish that could be used instead. When you have time, I recommend making the vegan fish from scratch.

I don't like tartar sauce! What else can I drizzle on these vegan fish tacos?

Sometimes I do a little mayo mixed with hot sauce and it's super delicious paired with the vegan fish and slaw.

I don't like red cabbage slaw?! What other toppings can I use?

Anything and everything! Top these off with corn salsa, mango salsa or even fresh pico de gallo.

I would greatly appreciate if you share your review in the comments below and leave a ⭐️⭐️⭐️⭐️⭐️ rating. I really appreciate it- it helps me out so much! Don’t forget to add if you made any fun substitutions. Thank you! 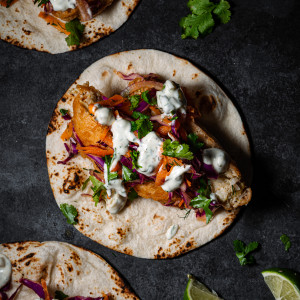 Note: The total cook time does not include making the vegan fish sticks, red cabbage slaw or tartar sauce.
Did you make this recipe?Please leave a comment on the blog or share a photo on Instagram!