I was brainstorming ideas for my December recipes and was getting pretty frustrated until Daniel said "Just make a pop tart." Uhhh, brilliant. I started thinking of flavors I would like to eat in the winter and well, hot cocoa. Yep. That's it! A Hot Cocoa Pop Tart is the perfect Christmas treat. Imagine eating these Vegan Hot Cocoa Pop Tarts with an actual cup of hot cocoa.... That's what dreams are made of! Or maybe too much? Never enough chocolate on Christmas in my opinion!

These Vegan Hot Cocoa Pop Tarts are a little more hands on so it's great to make with your family. But not hard at all. Just rewarding and absolutely worth it! This Hot Cocoa Pop Tart starts with a chocolate pastry dough. It's not sweet but buttery and flaky. It pairs perfect with the sweet chocolate fudge filling. Then, it's topped with a light and fluffy aquafaba meringue that is toasted. Finish it off with a chocolate fudge drizzle and serve!

What You Will Need For These Vegan Hot Cocoa Pop Tarts

I don’t recommend substitutions when it comes to baking. One simple change can change the whole recipe. Try any substitutions at your own risk and leave a comment down below if they worked out or not!

How To Make The Best Hot Cocoa Pop Tarts Every Time 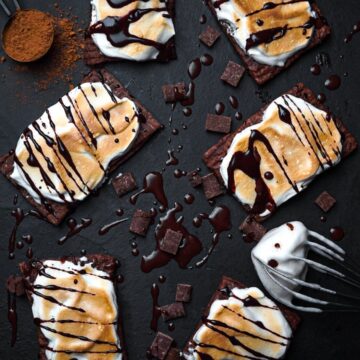 These Vegan Hot Cocoa Pop Tarts are a little more hands on so it’s great to make with your family. But not hard at all. Just rewarding and absolutely worth it! This Hot Cocoa Pop Tart starts with a chocolate pastry dough. It’s not sweet but buttery and flaky. It pairs perfect with the sweet chocolate fudge filling. Then, it’s topped with a light and fluffy aquafaba meringue that is toasted. Finish it off with a chocolate fudge drizzle and serve!
5 from 1 vote
Print Pin Rate
Prep Time: 30 minutes
Cook Time: 25 minutes
Chill Time: 1 hour
Total Time: 2 hours
Servings: 8 Pop Tarts
Author: Liv King