A traditional Whiskey Sour starts with good quality whiskey, lemon juice, sugar and sometimes egg whites for a nice foam on top. Today, I'm going to show you a fall inspired version of the classic whiskey sour but VEGAN with added apple juice and cinnamon and an aquafaba foam. This drink is perfectly spiced, sweet, and sour. It's a winning combination! Kind of like an apple pie flavored cocktail. Yum!!

I recently sort of, kinda became a bartender randomly. It has been pretty fun learning about alcohol and crafting drinks. This job has given me a new outlook on crafting cocktails and how it really can be an art form. I'm not much of a drinker but I love to have a nice cocktail every once in a while. I'm thinking of making this a series on my YouTube. Maybe I'll share a nice cocktail once a month? Let me know what you think about that!

What You Will Need For This Cinnamon Apple Whiskey Sour

For this cocktail, you will definitely need a cocktail shaker. I use one from Target but I won't link it here because it leaks every time without fail and I've been meaning to upgrade. This one from Crate & Barrel is the one I'll get next!

How To Make The Best Whiskey Sour

Typical Whiskey Sours have egg whites in them to create a foam on top. This can EASILY be replaced by using aquafaba. Shaking all the ingredients in the cocktail shaker without ice first with create the perfect aquafaba foam. Then, we'll add the ice and shake again to chill.

Whiskey Sours can be served straight up without ice or on the rocks. If you're serving over ice, I would recommend getting one of these ice cube trays as a big ice cube will melt slower and won't water down your drink. 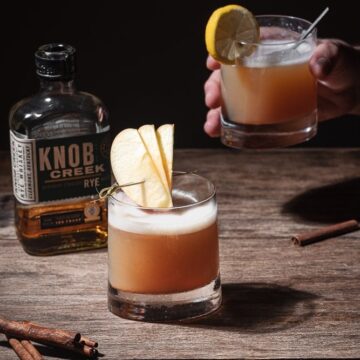 A Whiskey Sour can be served straight up or on the rocks. If you want ice, use 1 large ice cube to avoid watering down the drink.
Did you make this recipe?Please leave a comment on the blog or share a photo on Instagram!