Cinnamon Raisin Irish Soda Bread is the easiest bread you’ll make! This vegan version to the classic Irish soda bread requires no proofing or kneading and the dough comes together in less than 10 minutes.

Soda bread has a soft crumb with a Biscuit-like texture. The flavor is very mild which is why I love to add plenty of cinnamon and raisins and serve with vegan butter and a homemade jam. If you are a fan of easy bread recipes without yeast, this Irish Soda Bread is truly a must-try! I fell in love with this recipe the first time I made it years ago. I hope you enjoy!

What is Irish Soda Bread?

Irish Soda Bread is a quick bread so there is no need for yeast or waiting hours before enjoying. I love the addition of cinnamon and raisins as I think it gives it a nice flavor but leave them out if you wish.

When it comes to baking especially bread I can't recommend any substitutions confidently to the dough itself. But with that being said, the raisins and cinnamon are optional.

Give the plant milk and the apple cider vinegar a few minutes to curdle. This creates our "buttermilk" which is essential to Vegan Irish Soda Bread because store-bought buttermilk is not vegan friendly.

How to Make This Recipe

Make a flax egg. When ground flax is mixed with water is becomes gelatinous and is perfect for an egg replacement in baking.

Whisk together the dry ingredients. I use a Kitchen Aid Stand Mixer with the dough attachment but this bread can be made by hand as well. It's a soft dough and requires no kneading so this isn't a necessity.

Combine all of the above and then add in the cinnamon and raisins if using and transfer to a properly seasoned cast iron skillet. You could also use a baking tray or a 10in cake pan. Keep in mind it will spread a little if you go with the baking tray.

Bake for 45 minutes or until crisp and golden and sounds hollow. Let cool and then enjoy with vegan butter and jam.

Can I omit the raisins and cinnamon?

Of course! I personally love the additional raisins and cinnamon but if you're not a fan of raisins, leave them out. I also love to make this soda bread plain and serve with stews and chili.

Does this recipe call for Buttermilk?

This is an Irish Soda Bread recipe without buttermilk.

Can I omit the apple cider vinegar?

Apple cider vinegar is what is going to activate our baking soda. Baking soda needs an acid for it to work and to help rise our soda bread. If you don't have apple cider vinegar you can use white vinegar but don't leave it out entirely.

What's the texture of this Irish Soda Bread?

The texture is almost like a biscuit. It's a very light crumb and soft on the inside but with a golden crisp crust.

Why is my Irish Soda Bread dry?

This happens when you add too much flour. See above for my tips on how to properly measure flour. 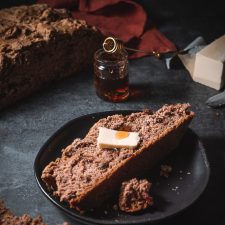 This loaf is best served fresh and warm but all leftovers should be wrapped tightly in foil and stored in the fridge for up to 2 days or should be frozen in slices. Simply thaw frozen slices in the fridge and reheat as needed.
Did you make this recipe?Please leave a comment on the blog or share a photo on Instagram!