Jump to Recipe Jump to Video

It's almost Christmas and this Vegan Cinnamon Sugar Star Bread needs to make an appearance. This bread looks impressive and will quite literally be the star of your holiday gathering. While it's appearance is visually beautiful, it's actually very simple to make. This star bread is filled with cinnamon sugar and melted butter and tastes sooo delicious. It's similar to a cinnamon roll but less sweet and slightly delicate. The beauty of this recipe is that it is a blank canvas. I went with cinnamon sugar because cinnamon reminds of Christmas but the filling options are endless. See below for some more sweet ideas!

When I say this recipe is simple, I really mean it! Once you make the dough all you have to do is roll it out in to four 10in circles and then brush butter and sprinkle cinnamon sugar on three of the layers and stack them up with the top layer remaining plain. Then, slice and twist!! It's so simple and such a wonderful Holiday treat.

If you love this version, try the savory version! My Vegan Garlic Parm & Herb Star Bread is perfect for pasta nights or any time you have guests to impress. Get the recipe here.

What You Will Need For This Cinnamon Sugar Star Bread

A stand mixer makes bread making a breeze but it's not necessary. You can easily do this by hand, it might just be a bit messier since this is a soft dough.

I don't recommend making any substitutions to the dough itself. This recipe was tested multiple times and this was the best outcome. But the filling is up to you!

How To Make The Best Star Bread Every Time

Don't add too much flour to your dough. It will be a soft dough but it shouldn't stick to your hands when they are very lightly floured. Remember to lightly flour your work surface and rolling pin but that's all the flour you should need.

Don't stress about having the most perfect twists or circles. It'll look beautiful regardless! Just make sure the circles are 10 inches and use your hands to shape it back in to a circle if it becomes a little wonky during the layering process.

I always use and recommend instant yeast because you can add it straight to the dry ingredients and skip the extra step of activating it. If you want to use active dry yeast, go ahead but don't forget to activate it. The most important part of yeast is the liquid temperature. I always go with 120F-125F and highly recommend using a thermometer. 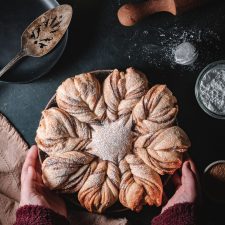 It's almost Christmas and this Vegan Cinnamon Sugar Star Bread needs to make an appearance. This bread looks impressive and will quite literally be the star of your holiday gathering. While it's appearance is visually beautiful, it's actually very simple to make. This star bread is filled with cinnamon sugar and melted butter and tastes delicious.
5 from 2 votes
Print Pin Rate
Prep Time: 15 minutes
Cook Time: 30 minutes
1 hour 30 minutes
Total Time: 2 hours 15 minutes
Servings: 8
Author: Liv King

I recommend freezing leftovers and then reheating them in the oven at 350F for a few minutes.
Did you make this recipe?Please leave a comment on the blog or share a photo on Instagram!