This Vegan Naan is absolutely delicious and even has an option to stuff with vegan cheese! Pillowy soft bread stuffed with vegan feta and mozzarella cheese then cooked on a stove top until golden brown... I mean. Is it optional? Not to me! UGH, so good!! You're gonna love this.

Naan is an incredibly popular recipe made from yeast and yogurt and is cooked on a dry hot skillet until bubbly and golden. There are different types of flatbreads like naan bread in Asia but the one that is the most well known is the one from India.

I live in America so my introduction to naan bread has been from Indian Restaurants. They usually are not vegan because they are made with yogurt but I've always wanted to make it from scratch at home. Making the switch from non-vegan to vegan is quite simple and tastes just as pillowy and soft as the non-vegan version.

You can serve this Vegan Cheese Stuffed Naan Bread with just about everything! Soups, stews, curry, masala, or straight off the pan to just name a few. You'll never want to eat an Indian inspired dish without it again. It really is that good. The best part?! It's SO simple! Make the dough, stuff with cheese, roll it out, and cook it on the stove top. That's it! The hardest part is waiting for the dough to double in size.

What You Will Need For This Vegan Cheese Stuffed Naan Bread

I don’t recommend substitutions when it comes to this recipe. One simple change can change the whole recipe. Try any substitutions at your own risk and leave a comment down below if they worked out or not!

How To Make The Best Vegan Cheese Stuffed Naan Bread

The flour must be properly measured by spooning the flour in to the measuring cup and leveling off. Alternatively, you could scoop from the bag but be sure to fluff the flour and don't overpack. If you pack the flour in to the cup, the dough will be stiff and the naan won't be as soft and pillowy.

You can use active dry yeast instead of instant yeast but be sure to activate the yeast first by following the instructions on the package. I prefer instant yeast because you can mix it in with your dry ingredients.

I highly recommend getting a thermometer to test the temperature of the wet mixture. This is an investment that is completely worth it if you bake with yeast often. If the mixture is too cold, the yeast won't activate. If the mixture is too hot, it will kill your yeast. Getting a thermometer will remove the worry that it isn't the right temperature.

Freeze your leftovers and reheat them in the oven! They will taste just as delicious this way.

Recipes to Serve Vegan Naan with: 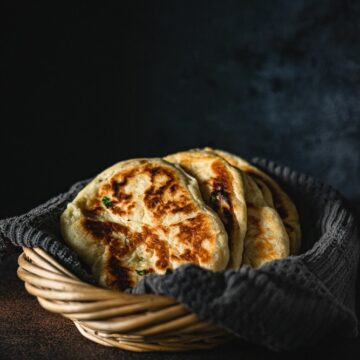