This creamy and delicious Vegan Cream of Chicken Soup Substitute is the perfect addition to your favorite casseroles, stews, or soups for when you’re in need of a comforting dinner.

Have you been trying to veganize all those cozy casseroles and soups from your childhood but can never seem to figure out what to replace the canned cream of chicken soup with?

Well, look no further! This is the perfect vegetarian substitute for cream of chicken soup. It's flavorful, creamy, and ready in less than 10 minutes!

What is condensed soup?

Condensed soup is essentially soup that has been boiled down to a thick stock and most of the water has been removed.

It's a popular base for many dishes like casseroles, soups, and stews.

If you are dairy-free, vegetarian, or vegan, this is the perfect substitute for you!

When you go to use your vegan cream of chicken soup, it will be super thick and gloopy. If you’ve ever opened one of those cans, you know exactly what I mean.

But that's what you want! This makes it an ideal 1:1 replacement for condensed cream of chicken soup in all of your favorite recipes.

Vegan Butter is combined with All-Purpose Flour to create a paste consistency then whisked with broth and heavy cream. When simmered, it thickens and cools to become the perfect consistency for the vegan condensed cream of chicken base.

Vegan Chicken Broth: I recommend using this homemade Vegan Chicken Broth recipe. It's made up of nutritional yeast and lots of seasonings. It's a powdered seasoning blend that can be pulsed into a fine powder and whisked into water to create the best vegan chicken stock. See tips & tricks if using store-bought.

Vegan Heavy Cream: For this recipe, you'll need to prep ahead the heavy cream. For a vegan version, I used my homemade Vegan Heavy Cream recipe. It's made up of water and cashews.

Seasonings: The vegan chicken broth contains a lot of seasonings as is but I added parsley, onion powder, garlic powder, salt, and black pepper.

The chicken broth powder will need to be pulsed in a blender in order to create a fine powder before being mixed with water.

The heavy cream recipe will need to be blended as well to cream a creamy texture.

For both of those recipes, I use my NutriBullet Blender. In order to blend cashews, you'll want a high-speed blender.

How to Make This Recipe

Melt the vegan butter over medium heat in a medium-sized pot.

Whisk in the flour until no raw flour is visible and a paste has formed.

Then, slowly whisk in the vegan chicken broth, vegan heavy cream, and seasonings.

Whisk continuously until thickened, about 3 to 5 minutes. You'll know it's done when it gets harder to whisk. Remove from heat. Note that it will continue to thicken as it cools.

Use in any recipe to replace canned condensed cream of chicken soup.

The great thing about making it at home is the ability to control the salt.

Store-bought broths can sometimes be too salty.

If using store-bought vegan chicken broth, I recommend adding the extra salt a little bit at a time until the desired saltiness is reached.

Vegan Chicken Broth: Store-bought chicken broth is always a great substitute. You can use vegetable broth as well but that would change the overall flavor profile because it lacks the classic chicken flavor that we are after. This is achieved by different spices and herbs than vegetable broth.

All-Purpose Flour: I haven't tried this with gluten-free flour but if you give it a go, let me know how it turns out.

Vegan Heavy Cream: My vegan heavy cream recipe is simply cashew cream. I haven't attempted this recipe nut-free. You could try soy milk or full-fat coconut milk but I can't guarantee results if you use something else.

Cream of Mushroom Soup: If you want to make a vegan cream of mushroom soup, you can use mushroom broth or whisk in mushroom powder.

Cream of Celery Soup: If you want to make cream of celery soup, you can add fresh celery or celery salt.

How to Use Vegan Cream of Chicken Soup

This isn't a soup recipe that you can serve up in a bowl. I mean, you could. But I don't recommend it.

Use your homemade cream of chicken soup without chicken in casseroles, soup recipes, gravy, stews, or sauces.

Serve as a simple soup by whisking the cream of chicken soup base with vegan chicken stock or water to thin it out. Add some cooked vegetables and vegan chicken for a simple yet creamy and delicious soup.

This is a perfect substitute to use in all those creamy casseroles that are served during Thanksgiving and Christmas like this Vegan Green Bean Casserole.

Storage: Allow the homemade cream of chicken soup substitute to cool completely and store in an airtight container and refrigerate for up to 1 week.

Reheating: Add directly to soups, casseroles, or stews- whisk to combine. If using as a base for soup, whisk water and vegan cream of chicken soup on the stovetop until warmed through and thinned out to desired consistency.

Freeze: Allow to cool and store in an airtight container and freeze for up to 4 months.

Why is my vegan cream of chicken substitute lumpy?

To avoid this, keep the heat low and whisk continuously. You can still use a lumpy soup base.

Can I eat this soup as is?

It's best served when mixed with other ingredients as a cream base. But you can thin it out with water and enjoy it if desired. 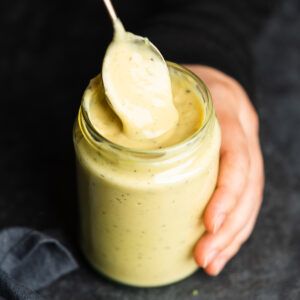 Disclosure: This page contains some affiliate links. Please know that I may receive a percentage or commission from a link included on this page, at no extra cost to you. I will only ever recommend a product that I have used and believe has substantial value to my readers.